Multivariate statistics are used to summarize large collections of numbers into (1) a smaller
sets of numbers or (2) graphs of low dimensionality. To fully understand both of these
applications it is helpful to understand several key ideas from trigonometry and analytic
geometry.

In today’s lecture we will review two common metrics for measuring angles: (1) degrees and
(2) radians. We will then review the most common trigonometric functions and demonstrate
how correlations can be represented as cosines between directed line segments (i.e.,
vectors).

The size of an angle can be described in various metrics just like the height of a chair
can be described in various metrics (e.g., in inches or meters). Two common metrics for
describing angles are degrees and radians. Many psychologists are familiar with the degree
metric from various “nonmathemathical” contexts. Persons who have taken trigonometry
or calculus are no doubt familiar with the notion of radians since radian measures are
found often in higher mathematics.

Mathematicians often teach the twin notions of degrees and radians with the help of a
circle of radius 1 (recall that the radius of a circle is 1/2 of the diameter). A circle of
radius 1 is often called the unit circle. Regardless of a circle’s radius, a circle can be
divided into 360 degrees. Notice in Figure 1 that when speaking of degrees, a right angle
defines an arc that subtends 90 degrees of the circle. Other degree markers are denoted
on the circle. 1° is one-ninetieth of a right angle.

When s is the length of the arc subtended by ∠ a, then the radian measure of

. This
idea is illustrated in Figure 2. 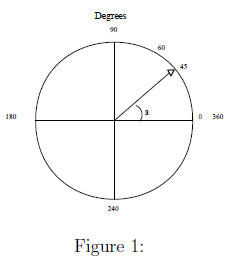 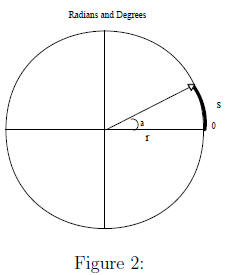 Figure 3 shows the sizes of some common angles in degrees and radians. 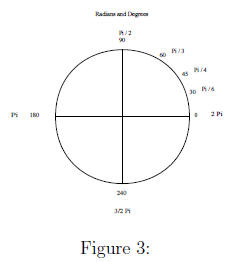 Fill in the Blanks

We could write a simple R function to convert degrees to radians.

In a later lecture we will discuss matrix rotations (e.g., when we discuss Factor Analysis,
Principle Components Analysis, etc.) and two important trigonometric functions of angles:
(1) cosines and the (2) sines. Here is a quick review of these (and other) functions.
Note that these functions can be defined as the ratios of the sides of a right triangle. 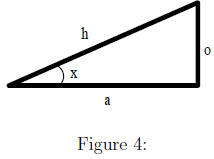 Representing correlations as vectors in space

Let’s return to the height and weight data from Chapter 2. 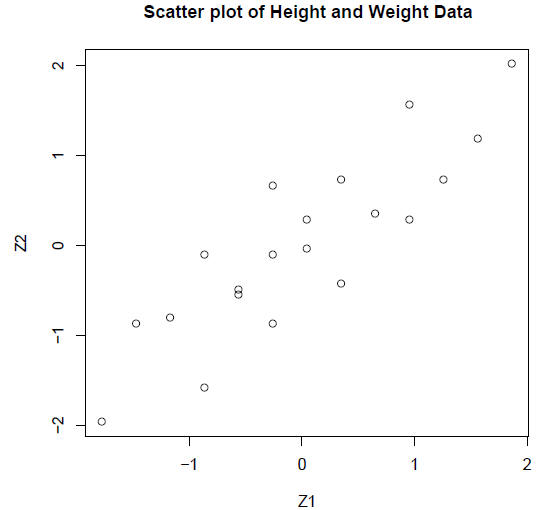 Notice that we have 20 pairs of data points for 2 variables: height and weight. The above
scatter plot shows how the data can be plotted in two dimensional space. The paired
data fall within a relatively narrow ellipse, indicating that the data are well described by
a linear correlation. 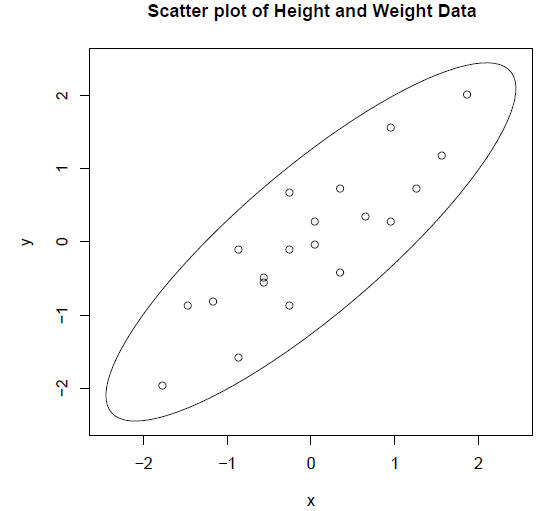 Alternatively, we can represent each variable (height and weight) as vectors and depict the
correlation between the variables (vectors) as the cosine of the angle between the vectors.
Specifically:

In the above scatter plot we were working with z scores. What is the vector norm (vector
length) of a set of z scores?

Representing Correlations as Angles
To find the angle that corresponds to a correlation we need to use inverse trig functions.
Specifically, the arc cosine function. Remember that when you are using these functions
the results will be reported in radians, not degrees.

What angle corresponds to the correlation between the height and weight data?