What is a linear equation?

What does it mean to solve a system of linear equations?

What are the possible cases when solving a system of linear equations?

Note: We will first learn how to set-up the system in these word problems. We will later return to
learn how to systematically solve these problems.

Example 6: An investment club has $200,000 earmarked for investment in stocks. To arrive at
an acceptable overall level of risk, the stocks that management is considering have been classified
into three categories: high-risk, medium-risk, and low-risk. Management estimates that
high-risk stocks will have a rate of return of 15%/year; medium-risk stocks, 10%/year; and
low-risk stocks, 6%/year. The members have decided that the investment in low-risk stocks
should be equal to the sum of the investments in the stocks of the other two categories. Determine
how much the club should invest in each type of stock if the investment goal is to have
a return of $20,000/year on the total investment. (Assume that all of the money available for
investment is invested.)
Set-up the linear system:

• A matrix is an ordered rectangular array of numbers. A matrix with m rows and n columns has size
m×n. The entry in the ith row and jth column is denoted by aij.

• Augmented Matrix: We can combine two matrices into one, visually separating them by a vertical
line. This is useful when solving a system of equations.

This method allows us to strategically solve systems of linear equations. We perform operations
on an augmented matrix that is formed by combining the coefficient matrix and the
constant matrix as shown in the next example.

1. Each row of the coefficient matrix consisting entirely of zeros lies below any other row having
nonzero entries.
2. The first nonzero entry in each row is 1 (called a leading 1)
3. In any two successive (nonzero) rows, the leading 1 in the lower row lies to the right of the leading
1 in the upper row.
4. If a column contains a leading 1, then the other entries in that column are zeros.

Note: We only consider the coefficient side (left side) of the augmented matrix when determining
whether the matrix is in row-reduced echelon form.

Example 8: Are the following in Row Reduced Echelon form?

To put a matrix in Row Reduced Echelon Form, there are three valid Row Operations:

Example 10: Solve the system that we set-up in Example 5.

Example 11: Solve the system that we set-up in Example 6.

Note: Our calculator will put an augmented matrix into row-reduced form for us. This only
works when the # of rows is less than or equal to # of columns. Below are the steps you must
follow

1. Enter the augmented matrix into your calculator.
2. Go to your home screen.
3. Press MATRIX, cursor right to MATH, and select B:rref.
4. Call the matrix you want to reduce and hit ENTER.

We will use the calculator for working the problems in the next section. You are responsible
for knowing how to do the Gauss-Jordan Method by hand, but always remember that you can
check your work with the calculator.

We are using the same process from Section 4.3 but now our solutions will not always be unique.

Example 5: The rush hour traffic flow (the number of cars per hour) for a network of four one-way
streets in a city is shown in the figure below: 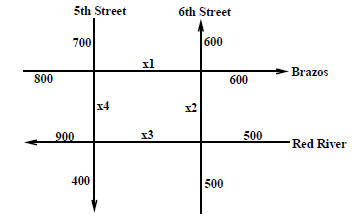 a) Determine the system of linear equations determined by the traffic flow at each intersection.

b) Solve the above system.

c) What is the maximum number of cars that can travel from Brazos to Red River on 5th street in an
hour?

d) If the traffic lights are adjusted so that 1,000 cars per hour drive on the stretch in part (c), determine
the flow around the rest of the network.