4.1 Introduction to Fractions and Mixed Numbers

4.1.a Identifying Numerators and Denominators

4.1.b Writing Fractions to Represent Shaded Areas of
Figures 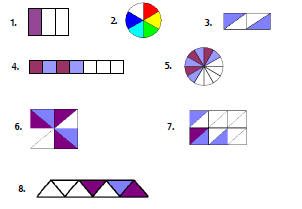 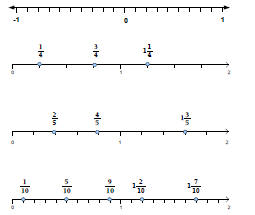 4.1.c Examples: Graph the following fractions on
a number line:

4.1.d Simplifying fractions of the form: 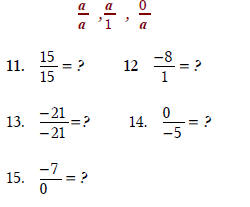 Mixed Numbers:
A number containing a whole number and
a proper fraction. 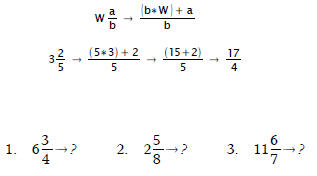 4.2.a Writing a Number as a Product of Prime
Numbers

Determining if a number is divisible by 2, 3, or 5

4.2.b Writing a Fraction in Simplest Form 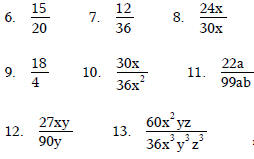 Determine if 7/9is equivalent to  21/27
Using Prime Factorization of numerator and denominators of both fractions:

Determine if they are equivalent by Cross Multiplication

4.2.c Examples: Determine if the following fractions
are equivalent.

14. There are 58 national parks in the United States. Six
of these are in Washington state and 2 are in Wyoming.
Determine, in simplest form, the fraction of the parks
located in each state?

15. The outer wall of the Pentagon is composed of 10
inches of concrete, 8 inches of brick, and 6 inches of
limestone. What is the fractional width of (i) the
concrete (ii) the limestone?

4.3.b Evaluating Expressions with Fractional
Bases

4.3. c Dividing Fractions
Invert the fraction in the denominator
Multiply the numerator and inverted
denominator fractions 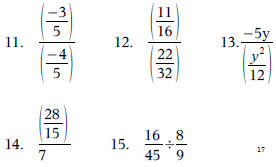 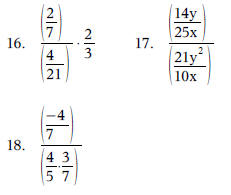 given the following replacement values for x and y
in (x,y) format.

4. 4 Adding and Subtracting Like Fractions and
Least Common Denominator 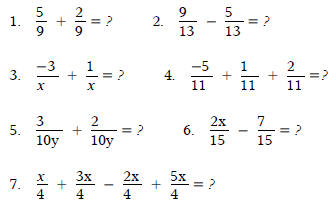 4.4.b. Adding and Subtracting Given Fractional
Replacement Values

Examples:
Evaluate each expression for the given replacement
values (x,y,z)

4.4 c Solving Problems by Adding and Subtracting
Like Fractions

Examples:
Find the perimeter.
16. A rectangle with dimensions :

17. A triangle with sides of length:

18. A square with a side length of

The LCD is the smallest denominator that is evenly
divisible by ALL denominators in a list of fractions.

: The LCD is '12'
When adding or subtracting unlike fractions, all
must be converted to equivalent fractions of the
same denominator.

Method 1:
Determine if the Largest original denominator is
evenly divisible by ALL denominators in the set of
fractions.

Use prime factorization of all denominators. Works
for a list of 3 or more fractions.

ALL unique prime factors appearing in ALL
prime factorization of the denominators
Each prime number factor will appear the
same number of times as the maximum
number found in ANY ONE of the prime
factorizations.

Find the 'prime factorization of ALL denominators of
the following fractions:

Prime Factorization of the denominators: 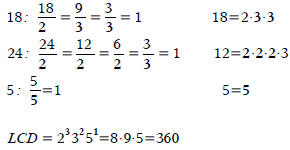 ( 4.4.d )Note:
The LCD is the product of Every Different Prime
Number appearing in the prime factor ization of the
denominator s. (2*3*5)

Each of these unique prime number factor s is raised to
a power equal to the Maximum Number of Occurrences
of that prime number in any one of the factorizations.

This is demonstrated by the exponents of all unique
prime number factor s denoting the maximum number
of coinsurances of each.

4.4.d Examples: Find the LCD of the following sets
of fractions: 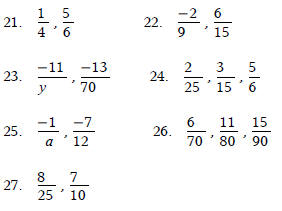