•A physical measurement made with an
instrument yields a rational number
•At the microscopic level, most physical
phenomena are discrete
•Any electrical charge is an integer multiple
of the electrical charge of an electron
•Electrical current (charge/unit time) is a
rational multiple of the quantity
one electron charge/s

But, the models are real numbers

•The real numbers in computer programs
are actually rational numbers — irrational
numbers cannot be represented exactly
•Then, why are physical parameters
modeled as continuous variables?
•Easier to get (the “right”) answers
•Calculus can be used:

assumes that i is a continuous function of t

•All actual measurements result in rational
numbers, but we model the measurement
as being an arbitrary real number
•We all understand that V = 1.235 volts
really means that V is some real number in
the range 1.2345 ≤ V  ≤ 1.2355 volts
•This modeling is useful and convenient in
the physical sciences and engineering
but causes difficulties in probability theory

•Uncountably infinite sample spaces are
the real line (or intervals thereof )
•Such spaces cause subtle mathematical
difficulties in probability theory
•The resolution of these difficulties led to
the development of the axiomatic theory of
probability
•We will look only at the end results, not the
gory details

•The output of rand() is a good model
for repeated trials for the experiment of
picking a number at random in (0, 1)
•Every call to rand() returns a different
number
•Relative frequency of a specific number in
(0,1) converges to 0
•Actually, the output of rand() is periodic
(with long period,) and the numbers will repeat

, the impossible event
•A zero-probability event can occur on a
trial of the experiment:

never ever does
•It is just that a zero-probability event does
not occur too often — in fact, it is usually
observed only once at most

Events of probability one

, the certain or sure event
•An event of probability one need not occur
on every trial:

Any probabilities other than 0 or 1?

•If every outcome is an event of probability
zero, then isn’t it true that any event A
must also have probability zero?
•P(A) = sum of the probabilities of all the
outcomes that comprise A
= 0 + 0 + … = 0?
•No, the above is a mis-application of
Axiom III (which applies to countable
unions only)

•Example: Choose a random number
between 0 and 1
•Each outcome (and also any countable set
of outcomes) has probability zero
•However, P{a < outcome < b} = b – a
for 0 ≤ a < b ≤ 1
•The nonzero probabilities are assigned to
the intervals of the line, not to outcomes!

•For uncountably infinite sample spaces, a
consistent probability assignment to all the
subsets of

is not possible
•If we restrict the class of subsets of

Rules for collections of events

denote the collection of subsets of

is a
countable sequence of events, then,

that satisfies
Rules I–III is called a

•Rules I–III can be summarized as follows:
A

•For a finite or countably infinite sample
space, the collection of all the subsets of

events in it
•Smaller

•Given any partition of

, the collection of
all the sets that can be written as the union
of the sets in the partition is also a

field of the real line

is the real line (or an interval
thereof), we have a Rule IV for the

field contains all intervals
of the form (a, b) with a < b
•It can be shown that Rules I–III imply that
intervals of the form

also belong to the

field of the real line

field of the real line contains all
intervals of all types (open, closed etc)
•Since we will assign probabilities only to
the members of the

field of the real line?

field of the real line contains all the
intervals of all types
•It contains the complements and the
countable unions and intersections of
these intervals
•Are there subsets of the real line that are
not of this type? Yes
•Professor, can you describe one to us?
•Need Math 441 to understand description

consisting of all
possible outcomes of the experiment
nthe

•The probability measure P(•) assigns
probabilities to the events in

subject to
the following rules (axioms)
•Axiom I:

for all events A
•Axiom II:

is a
countable sequence of disjoint events,
then

is the real line, then we assume that

field of events, consists of all the
open intervals, and all the other events
that it must contain as per Rules I–III
•In this case,

that are
not in

and do not have probabilities
•These subsets never arise in applications

Duh! So what is all this good for?

•The axiomatic approach is the foundation
•The consequences of the axioms have
already been looked at earlier
•In practice, the formal axiomatic approach
to probability is not used on a everyday
basis in solving problems
•It is important to know what are the right
questions to ask: In infinite sample spaces,
ask for P{a < x < b} and not for P{x = c}

We know everything already

•The axiomatic theory tells about the
probability measure P(•)
•Since we know P(•), what is left to study?
•Generally, P(•) is known for only some of
the events
•The probability calculus allows us to
calculate the probabilities of other events
•So, why don’t we estimate these other
probabilities via (say) relative frequencies?

We don’t know everything already

•As before, the first step is to draw a
Karnaugh map 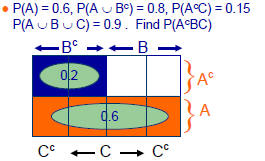 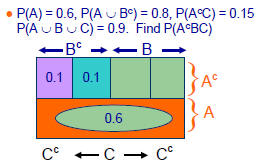 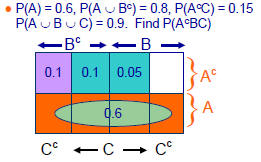