The basic laws for working with exponents are 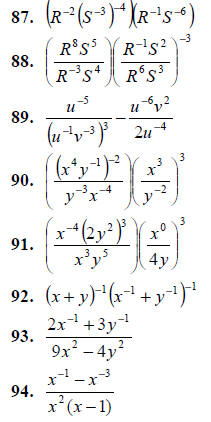 Recall that for a > 0 and n a positive integer,

means a positive number b such that b^n = a. It follows that

A word of warning!

For typographical convenience and historical reasons, it is customary to write expressions involving both fractions and radicals
so that no fraction appears under a radical sign and no radical appears in a denominator. This "rationalizing the denominator"
is accomplished in several ways, as illustrated in the following examples.

98. Rationalize the denominator in

.
99. Rationalize the denominator in

.
100. Rationalize the denominator in

.
101. Rationalize the denominator in

Equations involving radicals are often solved by rewriting the equation, raising both sides to some
power to remove the radical, and then solving the resulting equation. As with fractional equations, this
process may introduce extraneous roots. Potential solutions must be checked in the original equation.

. (Recall that § means nonnegative
square root!) Thus, x = 2 is not a solution. This equation has no solution.

Square both sides and find

Isolate the square root term to get

Checking by substituting into the original equation, we find that 6 is a solution and -3/4
is not. The only solution is y = 6.

A function, f (x) = x^a where a is a real number is called a power function. You have already worked with many power
functions including functions like